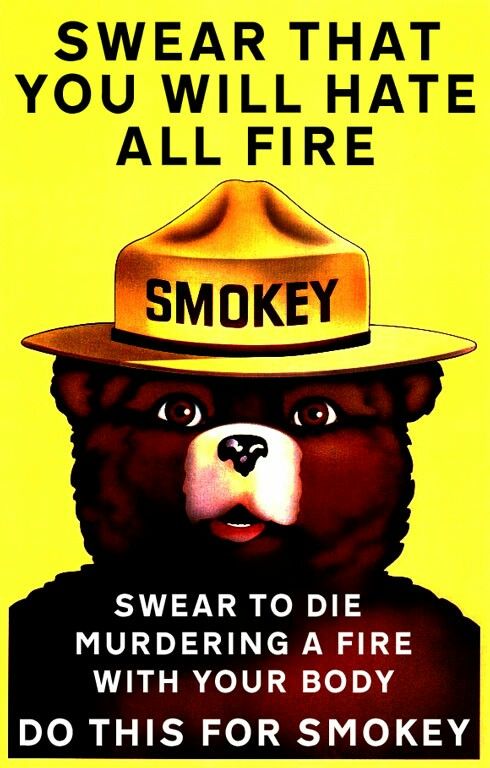 His name is Smokey Bear; there isn’t a, ‘the’ in the middle. Smokey, although one of the most recognizable figures in forest fire prevention, is not a God; he’s just a bear and he puts his jeans on the same as everyone else, one leg at a time. It’s always just been Smokey Bear, people began to add, ‘the’ in middle of his name, after a song that was written about him, by Steve Nelson and Jack Rollins. There was also a children’s story by the same title.

Smokey, an American Black Bear, has insisted, “that only you can prevent forest fires,” for nearly 70 years now, and has recently come under fire by wildfire policy experts. Scientist from the Food and Agriculture Organization, claim that he knows nothing about the ecology of trees & shrubs, biodiversity, and the role of fire as an ecosystem process.  In a computerized, modern age, Smokey is behind the times. Only recently, did he change his slogan from preventing, “forest fires” to preventing, “wildfires,” to include the many other kinds of habitats.

One agroforestry scientist said about Smokey, “He didn’t even know about grasslands.  He’s still talking about campfire safety and how to safely burn your lawn care debris.” Another scientist was more severe on the bear, “It’s a joke really. Nobody goes camping anymore and who the hell is still burning shit in their yard?” Smokey, when asked to comment on the scientific advancements said, “I’m a fucking bear.”

Smokey got his start as a mascot, for the United States Forest Service and the National Association of State Foresters, to educate the public about the dangers of forest fires. His first slogan was, “Care will prevent 9 out of 10 forest fires.” The forest fire prevention campaign first began during WWII, when the Japanese military set fire to the coastal forests in southwest Oregon. Since then, Smokey has become synonymous with forest fire safety. How much does he really know though, about wildfires and what is the actual success rate using his safety tips? Has he ever personally prevented a forest fire? Botanists have been clamoring for answers to these questions. Some recent investigating revealed, that his claim, “care will prevent 9 out of 10 forest fires,” is simply unfounded. The scientific data taken from one recent poll, said that care only prevented 1 out of 10 forest fires at best. Ecologists from the Nature Conservancy have called for Smokey’s resignation saying, he isn’t equipped to deal with modern fire ecology and that he is out of touch. “He doesn’t even have a Twitter page,” said one member.

The Sierra Club has gone even further and has called for an investigation by the EPA. They allege, that he’s even started some of the recent fires out in California, to stay relevant, keep his position and maintain his status. Smokey, was unable to be reached to comment on the allegation, because he was on his cigarette break in between shooting commercials.

Whether you see him as the voice of fire safety, or part of an old-fashioned campaign that needs to be overhauled, one thing is certain, those broad shoulders and hairy chest are way too provocative not to be covered with a shirt.

10 thoughts on “Smokey the Bear: Advocate for Forest Fire Prevention? Not so Much, Experts Say”