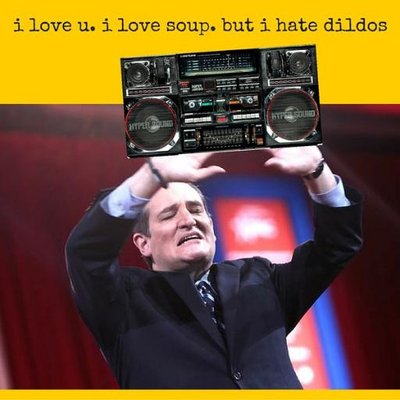 Don't fear the reaper is my favorite song about Ted Cruz running for President.

Ted Cruz is what happens when you leave your Venus Flytrap out in the sun too long.

If Ted Cruz loses the GOP nomination, at least he's got a job doing Dos Equis commercials as the least interesting man in the world.

Ted Cruz is what happens when you allow Biff Tannen to steal the DeLorean.

On the count of three, everyone shout out their favorite Ted Cruz snuff film.

Let’s not forget about the Senator of Florida and your favorite member of Menudo, Marco Rubio. Another anti-abortionist, who believes life begins as soon as Ronald Regan’s corpse says it does. He’s against stem cell research, raising the minimum wage, {pauses to take awkward sip of water} same sex marriage, climate science and the legalization of marijuana. He’s also available for parties.

Marco Rubio: You had a question.
Me: Yes, what's it like *makes air quotes* being the pretty one.

Marco Rubio: I got your Super PAC right here! *rips off pullover sweater*

David Hasselhoff wasn't the only one to shorten his name. Marco Rubio is shortening his to Marco Rube.

Chris Christie is the love child of J. Edgar Hoover and Joseph McCarthy, but you probably know him as the worse Governor ever of New Jersey. His hobbies include eating, getting winded and shutting down bridges.

The party isn't over until Chris Christie eats all the food & then closes the street off so you can't get home.

Everyone knows that the Bay of Pigs Invasion was started when Chris Christie went into the Piggly Wiggly.

I liked Chris Christie better when he was the Kool-Aid Man.

Who is John Kasich?

Let’s not forget about the lovable Rip Van Winkle, Ben Carson. The man who speaks slowly, but carries a big knife. The Neurosurgeon, who likes to take naps before, during and after surgery. The man who said that, “gayness must be a choice, because men who were raped in prison come out gay” and “evolution is a fairy tale created by the devil.” Hey, but he’s a neurosurgeon, so he must be smart. He also said he doesn’t “see” any global warming. It’s probably because he’s not wearing his special global warming sunglasses. Don’t get in an argument with him though, cuz he will stab a bitch.

Ben Carson thinks that all immigrants who come to this country should learn to speak the language & by that he means Old Entish.

Jeb Bush, former Governor of Florida and known as the, “smart brother.” He was the one everyone thought had the nomination in the bag and would be the one facing-off with Hillary. Sure he might have low energy, but he has high hopes of being a Fox News commentator. He is currently making his living by charging $20 per warm kiss.

*Shows up at Jeb Bush's house and demands warm kiss*

It wouldn’t be a Presidential race without Mike Huckabee, former Governor of Arkansas, Christian minister and lead singer of Stryper. He likes to Snapchat with Kim Davis and he believes that marriage should only be between a man and Jesus.

There was also the Senator from Kentucky, Rand Paul, son of Ron Paul, son of Arathorn, King of Gondor. He was called,”the sane one, kind of.” He is anti-abortion, but pro volumizing shampoo.

Rand Paul's hair looks like he's got a pack of Lucky Strikes rolled up in his suit jacket.

You might remember the Governor of Pennsylvania and sweater vest enthusiast, Rick Santorum. If you can’t remember his last name, just think of the word sanitarium. He doesn’t believe in contraception, gay marriage, global warming or empathy. He thinks moms should be at home and not working. He is currently working in a cigarette factory in 1955.

There is no Zuul, only Rick Santorum.

I’ve saved the best for last; the misogynist, bigot, homophobe, xenophobe, rambling- idiot, reality TV star, President-elect, Donald Trump. His slogan is, “make America grab pussy again.” He is the man every woman would love to work for, the kind that sexually harasses you and then threatens to fire you if you say anything. The Pope did not endorse him, but don’t worry Christians, he was endorsed by the Ku Klux Klan though. His motto is mi casa, su…YOUR ASS! Although we don’t know specifically what all his polices are, we do know that they are going to be, “great, huge, fantastic, amazing and very great.”

Me: Knock, knock.
Them: Who's there?
Me: Orange.
Them: Orange who?
Me: Orange mother fucker running for President!

Remember kids, Donald Trump is what happens when you feed your Mogwai after midnight.

Donald Trump's first executive order when he is elected President will be to demand to see Obama's birth certificate.

Donald Trump came her to kick ass & to use adjectives & he's all out of adjectives.

The ending of Raiders of the Lost Ark, where they open the Ark of the Covenant, only me at a Trump rally.

Snakes on a Plane 2: Trump Force One.

Donald Trump fun fact: All his tweets are written by The Iron Sheik.

How do you rate a President Trump on foreign policy on a scale of DEFCON 1 to 5?

Trump University is my safe word.

If Trump is elected, I bet his Secret Service code name is, "Der Orange Fuhrer."

Trump: Make me look presidential.
Hair stylist: How about we style your hair, so you look like Javier Bardem in No Country for Old Men.

Trump won't release his tax records, because he doesn't want us to see how much orange he gets to write-off.

Fox News poll says that Trump is now leading in the 10,000 year old cavemen thawed from a block of ice demographic.

Always remember where you were on the night of this historically horrific election, so that you can tell future generations of children, who are scavenging for carrion out of a nuclear waste dump.

Grandchildren: Where were you when President Trump got elected?
Me: Cowering in the corner crying tears of blood.

“If you want a picture of the future, imagine a boot stamping on a human face—for ever.” – George Orwell.

4 thoughts on “A Salute to Those Who Came Before: 2016 Republican Presidential Coverage”