People enjoy all kinds of literary genres and sub-genres. Books can evoke a wide range of emotions. For me however, I like nothing better than reading a book that makes me say, “um … okay?” It’s like saying, I see what you did there, when you really didn’t see what they did there. Nothing gives you that feeling of wtf more than absurdist literature. Absurdism if you will. No other genre of literature mimics actual life quite as well. It’s the joy of creating an entire world and then just sitting around poking it with a stick. Life is theater of the absurd; and if you don’t believe me, you’ve been dead since 2016 because we now live in a Kubrickian nightmare, where our president has lost all of his fuzzy warbles. Nothing in life is certain except death, taxes, and absurdity.

Take Waiting for Godot, it’s all about pointless conversations and waiting around for nothing, which is exactly how I spend the bulk of my time. If you really want to add bats to your belfry though, Kurt Vonnegut is always a good choice. His life and literary mantra is, “so it goes.” He once famously said, “we are here on Earth to just fart around, and don’t let anyone tell you differently.” Figuratively speaking, (literally if it’s Taco Tuesday) farting around is really what humans do with most of their time. Absurdity is practically limitless because it can expand and be stretched like rubber. I recently read Sudden Death by, Alvaro Enrigue. It’s about a tennis match between the painter, Michelangelo Mersi da Caravaggio, and the Spanish poet Francisco de Quevedo. Among some of the spectators are Galileo, the Pope and Mary Magdalene. They play with a special ball made from the hair of the recently beheaded, Anne Boleyn (human hair was one component put in tennis balls in the 16th century, in France the hair was mostly taken from a person who had recently encountered Madame Guillotine). Surely we can all relate to a surreal tennis match, where we hit a ball around made from the hair of a disembodied head; we’ve all been to the DMV. It’s also a great scene to put in a Fellini film because no one would notice.

Absurdity is everywhere, most especially in bureaucracies and government. The inefficiencies of the military industrial complex are written best in Catch-22, where the hero, Yossarian, is diagnosed by a psychiatrist as having, “a morbid aversion to dying.” It’s a catch (excuse) that is used the entire book for every outrageous thing someone does, even though it has no relevance. The office that wins the prize for being ineffectual, would have to be the Circumlocution Office in Little Dorrit. It’s a place where nothing gets done and gets done well. The office constantly pats itself on the back about what a good job its done (sounds vaguely familiar). My favorite line that embodies the senseless existence of a bureaucracy is when one worker begins complaining, “he walked in without an appointment and said he wanted to know. You know.” It really captures the futility of certain corporate establishments. In the play, The Memorandum, an organization creates a new language called “Ptydepe” to maximize efficiency. In the end, no one can really understand the intended meaning. The memos are constantly getting misconstrued. It has the same cryptic effect as sending a text with the poop, gun, and thumbs up emojis. In, 1984, the use of “Newspeak” eliminates words by artificially combining then into a portmanteau, so that people can think less. Incidentally, this is also Betsy DeVos’s entire educational policy. The words become so deceptive and misleading, they create a new reality. It’s kind of like “alternative facts.”

In life, sometimes we can’t tell if we are Rosencrantz or Guildenstern; it really doesn’t matter though because we are all going to end up like Yorick. It’s 2020, and things are fucked into a cocked hat of absurdity my friends. Life is Kafkaesque, so don’t be surprised if you wake up as a giant cockroach, waddling around being cannonaded by fruit. 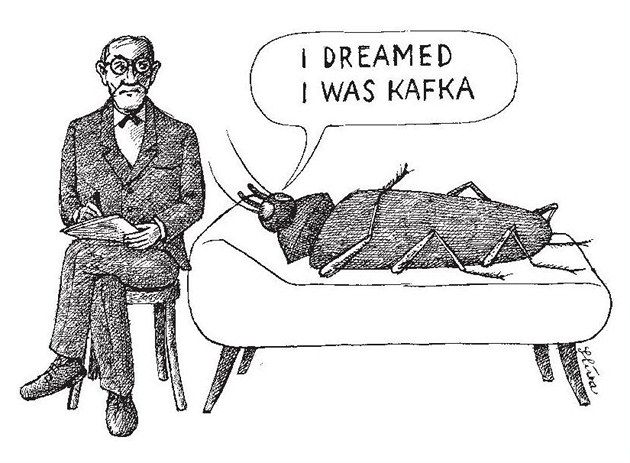 13 thoughts on “An Ode to the Absurd”