Today I am speaking with S.D. McKinley. He is a blogger and the author of How LJ and Rom Saved Heavy Metal, which is a very entertaining book packed with action, fast-paced dialogue and mischief.

M: Your book is about the journey of two friends, LJ and Rom, trying to save their friend Dom, the heavy metal guitarist and by extension the world. Where did you get your ideas for the book?

S: The ideas really sprang out of a deep sorrow for what has happened to some of the music stars in the 90’s and 00’s, which ended tragic to say the least. I chose to turn that sorrow into a fun story, to pay a comic tribute to these events and channel that energy into something teenagers and adults could enjoy. I wouldn’t say that these events are a passion of mine, but I felt strongly at the time.

Ideas really are a funny thing. There’s a little thing that clicks in the brain when a substantial idea comes to you, and It’s a conglomeration of these clicks stacked on top of each other, along with outside inspiration from other media, friends, and channeling something tragic into passion. This example is in works by James O’Barr, who lost his first love in a car crash, although I don’t recommend anyone going through that in order to make some artwork; it’s a healthy way to deal with these emotions.

You mentioned at the end of the first sentence – “the world.” Not only is the book about saving the life of a friend, it is also about saving the fictional world from a nefarious force that is hell-bent on the destruction of mankind’s dreams. Details are disclosed more at the very end of How LJ and Rom Saved Heavy Metal.

M: There is a lot of technical knowledge about cars and the two main characters are rally drivers. Are you a rally car/race car enthusiast or did you have to do a little research for the novel? What distinguishes rally car racing from other types of racing?

S: I’m ecstatic that you brought this point up, because my father was a speed boat racer ( ← YouTube link, Dad is mentioned around 7 minutes into the video ) for OMC / Evinrude and won a World Championship in France. He has also been in National Geographic on a couple of occasions, he’s a legend in the family. He continued with the company after his racing days were over as an engineer for boat motors: 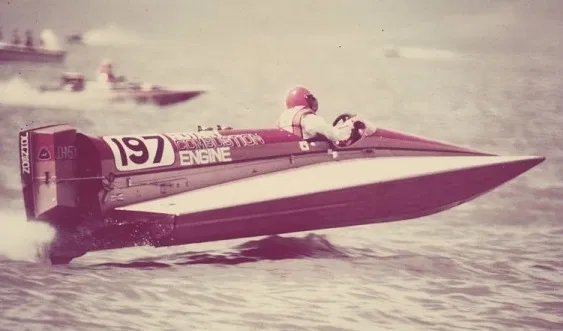 When I was a teenager, my Dad was my pit crew and I drove high octane go-karts on a dirt track. You can say racing is in my blood. It was a lot of fun and we grabbed a couple of trophies as a result. Imagine being 5 inches off the ground going 60 mph in a thing the size of a small computer desk. Adrenaline rush!

There was some heavy research on the features of a rally car and I became an expert overnight. While the book, I don’t believe has a lot of technical descriptions of the cars or rally racing itself, rally racing is something that is a lot bigger overseas. It’s all out madness, a single car at a time, racing as fast as possible through a linear racetrack with a driver and a co-driver to help. The co-driver is sorely needed to call out the next turn. That’s how intense it is.  Although it’s not a great spectator sport, unless a drone follows the car. Hopefully we will see more of that in the near future, with all the lit technology coming up.

M: There’s an interworking of pop culture in the novel like zombies, music and colloquialisms. They are not merely references; they set the scene for the novel. Do any of these things reflect what you like as well?

S: I’m happy that you could see this in the writing. Exactly, it’ like a cog in a machine, each piece being integral to the other. I really didn’t want to beat a dead horse with the zombie thing, so I put some twists on it, as to make it fresh for the reader. The crystal heart in the Jhaman’s chest serves a purpose. The Jhaman really sets the stage for the dark force in the book, which extends way beyond anything imaginable ( there will be answers in book #2 ). I do like things such as The Walking Dead, technology and fictional magic. As far as the music goes, I’m not biased at all toward heavy metal itself, which can be seen through what the rally car blasts through its speakers on the way down to Florida. I am, however, biased toward crafty music, whether it’s mainstream or not.

M: The story is about the journey to save heavy metal but it’s also about friendship, specifically between LJ and Rom, who have very different personalities. Do you have a close friendship like that?

S: Excellent question. I have a friendship like that and this is where things get a bit emotional for me. Just before I got the idea to write the book, a bad turn of events in the night led me thinking my friend ( which was a main inspiration for Rom ) had been badly hurt or worse, had died. There was a visual indication that he had fallen. I had no way of knowing if he was alive or not, because of my circumstances, which were unfavorable to say the least, and I wasn’t able to confirm or deny what happened for a couple of months. It’s a very difficult thing to talk about.

Friendships that have polarity are very powerful and deep. I should mention that everything is completely fine now with my life and my friend is great as well.

M: Your book is action-packed with a little bit of humor and camp. I was thinking it would also make a great graphic novel. Have you written anything else besides the novel?

S: Your idea about a graphic novel is perfect.

As far as big-project writing, this book was really an evolution of style and form in which I started writing compositions on paper around 2012. They were like rap lyrics and sometimes interludes to country songs; I house some of those on my blog now.

M: Do you try to write every day or is it more sporadic? Do you set benchmarks or goals for yourself?

S: I do write every day, but not in the book every time. I think it’s very important to exercise the craft daily and then also take breaks. When I break, it’s meditating on what will be included in the book next, which I consider to be writing as well. An idea may pop into my head, and I’ll use a note taking app to make sure it doesn’t get lost. It really causes a solid ‘ah shucks’ to escape my mouth when a thought for my writing gets lost, so I do everything I can to make sure I take hold of the moment in that regard.

Benchmarks, not so much. I see a lot of information swirling around these days and it’s just not for me. I would love to be able to sit down and write 2k words in a day, but at the moment it just ain’t happening. Maybe tomorrow, though. Who knows?

M: What are some books that have had an impact on you? Who are some of your favorite authors?

S: I think it might be obvious through the interview so far that I try to “toss it up” in the air sometimes and see what falls down and precipitates. That leads me into the venture of indie books, along with pub house books, also to non-fiction and fiction as well. I’m reading a book right now called Salt Blood by T.C. Parker and it is resonating with me pretty strongly and I love that.

When I was a teenager, I read a book titled The Eureka Effect: The Art and Logic of Breakthrough Thinking by David Perkins that really changed my whole life. If you are into upping your brain’s functional level, I can’t recommend it enough.

It’s difficult to pick favorites, but with mainstream fiction, I would have to say Stephen King’s The Dark Tower II: The Drawing of the Three, the reason being the way the words seem so effortless, being put down on the page in a way that makes writing seem easy for King. I forget, a lot of times with media there’s a hell of a lot of effort that goes into it and if that grindy synergy comes in just right, the efforts appear something similar to magic.

M: Will there be a sequel to How LJ and Rom Save Heavy Metal?

S: Absolutely. I recommend fully reading and grasping How LJ and Rom Saved Heavy first, it isn’t required, but I hope you’ll be glad to know there’s a web serial running for book #2 on my blog right now. As a reader, you are going to see the story spiral out in a way that will not disappoint and you’ll learn why Dom lost his dreams, along with more fighting against crimes at odds with big money makers and fictional celebrities. After all, that is why they are called celebrities, because it’s a celebration of something excellent.

M: Is heavy metal dead or does it live on through the ghost of Cliff Burton?

S: Thankfully, Cliff Burton’s personality gem was uploaded into a computer upon death. His spirit lives on through a more modern hard-hitting medium called dubstep that clicks with the kids these days. If you are interested in checking out some good dubstep, I recommend Feed Me or Pendulum. And mark my words: heavy metal will make a comeback at some point to mainstream media!

M: Tell people where they can find out more about you and your book.

S: A funny thing about books in relation to their author, is sometimes we don’t realize the scope of what we did until we contemplate it for a while. I just realized that the book should be classified as historical fantasy ( I’m working on that with the Amazon categories now ), because if you think back there was a polarity shift with music somewhere around the turn of the century. I realize that things can never really be “the way they were”, but this book signifies a place in time where it could have been different if LJ and Rom had stepped in to prevent this polarity shift. It’s just a thing of healthy expression and wonder. 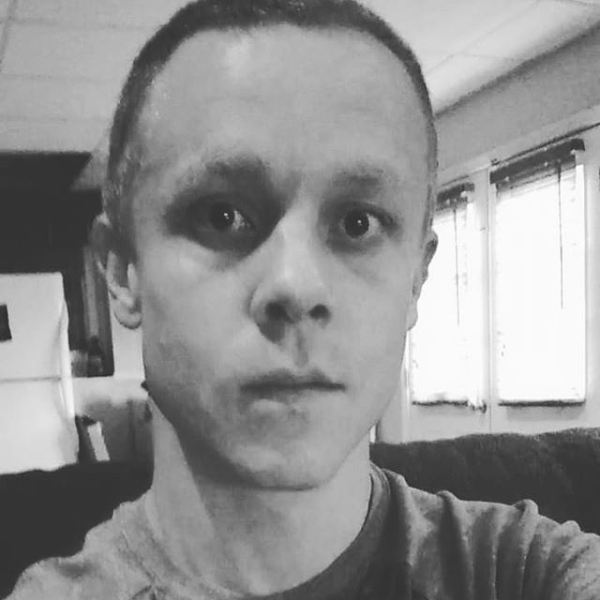 S.D. McKinley lives in the suburbs of Atlanta, Georgia. He was born in the first half of the 1980’s and grew up in Wisconsin as a young boy, then moved to Georgia when he turned exactly twelve years old. During teenage years, he raced dirt track go karts and played guitar. He discovered his current love for all kinds of art after his mid-life crisis at 25 years old. S.D. McKinley began writing books in 2017.

About How LJ and Rom Saved Heavy Metal, available via Amazon, world-wide:

Blurb: Ride along with LJ and Rom as they travel the US to stop the death of their friend Dom, a legendary heavy metal guitarist. What unravels before their eyes is a trippy conspiracy against them and technological warfare on the dreams of not only Dom, but humankind alike. Action packed with fast cars, guns, monsters, magic and an ending like no other. 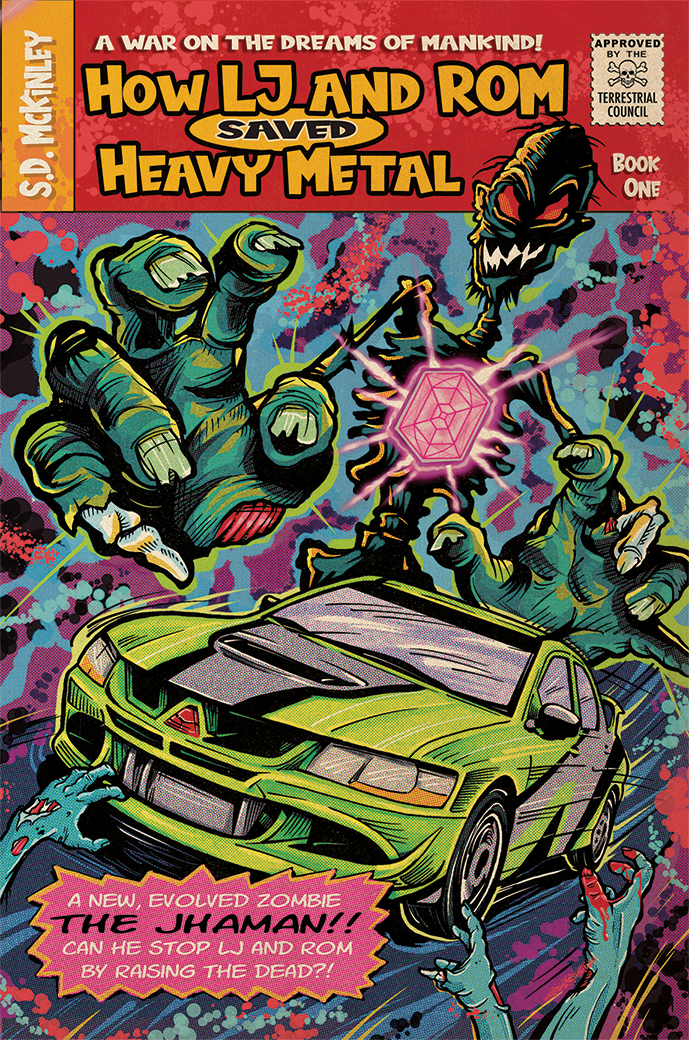 One thought on “Interview With Author S.D. McKinley”